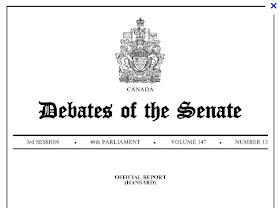 Our unelected, undemocratic Senate limps along with absolutely no regard for the nation. Here we have a Liberal Senator, who, as a result of Alzheimer’s disease has been declared legally incompetent. Yet for months, Liberal Senate officials ensured that she was in her seat, voting on Canada's federal legislation.

"OTTAWA—A Liberal senator was still at work four months after a geriatric psychiatrist declared her legally incompetent due to her struggle with Alzheimer’s disease.

Liberal Senator Joyce Fairbairn, 72, has been receiving round-the-clock care for more than year due to her declining health from dementia and will not return to Ottawa for the time being, according to a letter her niece, Patricia McCullagh, sent to Senate officials.

The letter, dated Aug. 13, says that a geriatric psychiatrist signed a declaration of incompetence for Fairbairn in February and that McCullagh and Leonard Kuchar, chief of staff to Liberal Senate Leader James Cowan, co-signed a power of care that made them agents that can act on her behalf. Senate attendance records show that Fairbairn attended sittings in the upper chamber regularly until the end of session in June, including when votes were taking place, for four months after she was declared incompetent."
The Star